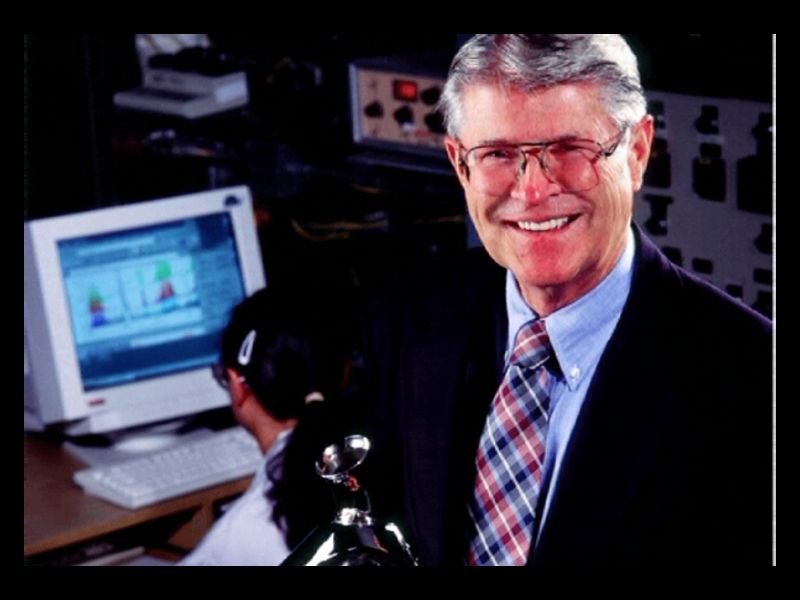 The Society of Automotive Engineers considers it among the top inventions since the dawn of the automobile. The EPA says it has saved thousands of lives and prevented hundreds of thousands of throat and lung ailments. In California, it is responsible for abating much of the yellow air, first studied in the 1950s, that has hovered over the greater Los Angeles basin for decades.

The modern catalytic converter, which scrubs smog- and soot-producing hydrocarbons, carbon monoxide and nitrogen oxides from automobile exhausts, has revolutionized air pollution controls with its invention in the 1970s.

It was the brainchild of two chemical engineers, John Mooney and his boss, Carl Keith, as well as a small team of their colleagues at Engelhard Corp.

Mooney, who died June 16 at home in Wyckoff, N.J., at age 90, is credited with the big breakthrough.

Catalytic converter development began in the ’50s, was spurred by federal regulations that mandated lead-free gasoline, which hampered and, in some cases, disintegrated antipollution devices. The three-way converter was a major advance over the oxidizing converter, which General Motors patented and began installing in vehicles in 1974.

Mooney and Keith, who died in 2008 at 88, worked with colleagues Antonio Eleazar and Phillip Messina and successfully experimented on a 1973 Volvo station wagon to create a three-way catalytic converter that reduced all three pollutants.

The device they created — a ceramic honeycomb coated with various oxides, platinum and rhodium using a single catalyst bed — was introduced on assembly lines in 1976.

The chemical reactions required to clear a light vehicle’s most noxious and harmful pollutants are different. Oxygen has to be stripped away from nitrous oxide but must be added to carbon monoxide and unburned hydrocarbons. Most engineers determined the solution for cleaner light-vehicle emissions would require a bulky, two-stage system.

Mooney thought he could tackle the problem in one step and hoped to prove it by doing something unexpected, he recalled in a 2013 interview with Seton Hall Magazine.

Rather than look at the exhaust, he focused on the gasoline piped into the engine. If it was mixed with the right amount of air, the exhaust would offer a one-stage converter and just enough oxygen to simultaneously render the three pollutants harmless.

Keith later sent Mooney around the world with an assignment: Convince automakers to add an oxygen sensor to their engines. The sensor would monitor fuel-to-air ratios so each engine could be tuned to optimize where Mooney’s one-stage converter would engage.

“It was a challenging experience,” Mooney said in a 2001 interview with New Jersey’s The Record newspaper. “You had to look at things inside and out and upside down. Nothing ever flowed perfectly.”

“No one really believed me,” he told Seton Hall. “Probably our competitors didn’t either.”

John Mooney was born April 6, 1930, and was raised in Paterson, N.J. After graduating from high school, he worked for Public Service Electric and Gas Co. while attending Seton Hall University, where he earned a Bachelor of Science degree in chemistry 1954.

His first car, a 1941 Ford convertible, was acquired in 1949 to travel to and from Seton Hall. The car worked — but not well enough. Mooney, 19 at the time, took the engine apart, leaving more than 100 pieces scattered across a friend’s garage, according to a 2013 profile in Seton Hall Magazine. After consulting with some mechanics, he rebuilt the V-8 and had the car humming better than ever.

He served in the Army from 1954 to 1955, where he was assigned to a series of nuclear tests in the Pacific Ocean at Enewetak Atoll in the Marshall Islands. He witnessed 17 atom bomb and two hydrogen bomb tests and was tasked with collecting soil samples, getting as close as 7.5 miles from some fission bomb tests.

He enrolled in the Newark College of Engineering — called the New Jersey Institute of Technology today — and earned a Master of Science in chemical engineering in 1960.

He received an MBA in marketing from Fairleigh Dickinson University in 1992 while working at Engelhard and was awarded an honorary doctorate in science in 2007 from New Jersey Institute of Technology for achievements in environmental protection and automotive engineering.

In 2003, Mooney and Keith received the National Medal of Technology and Innovation from President George W. Bush for inventing the three-way catalytic converter.

“Billions of people around the world breathe cleaner air because of this invention,” Margo T. Oge, director of the EPA’s Office of Transportation and Air Quality, told The New York Times in 2008, after Keith died.

As president of the Environmental and Energy Technology and Policy Institute, which he co-founded after retiring from Engelhard, Mooney collaborated with the Partnership for Clean Fuels and Vehicles of the United Nations Environment Program to eliminate leaded gasoline throughout the world, with his most recent efforts concentrated on African countries.

“My greatest contribution to the world was convincing countries to remove lead from gasoline,” he said in an interview published by Chemical Engineering Progress in 2005. “Lead in auto exhaust caused children in urban areas to lose up to 10 IQ points, and caused hypertension and serious heart problems for adults.”

Mooney was awarded 17 patents and elected a fellow of the Society of Automotive Engineers in 1990.

“Although I liked my chemistry courses well enough, I’ve always had a practical bent,” he once said. “I like to make things happen, and that’s what engineers do — they take the basic science and make things happen.”